Our commitment to helping our customers sleep better to live better has never been stronger. Curious to know why customers think that Puffy Mattress is the best mattress for any type of sleeper? Don’t take our word for it, see what thousands of happy sleepers have to say!

Reading our 5-star mattress reviews will demonstrate the quality of our product and the high level of customer satisfaction Puffy is known for. If you love your Puffy just as much as these happy customers, leave us a review to let others know how the amazing Puffy Mattress, Puffy Lux Hybrid Mattress, or Puffy Royal Hybrid Mattress has transformed your sleep!

Absolutely the most comfortable bed I’ve ever slept on! The best sleep i have had in years! My Labrador retrievers love their new bed too!

Margaret, we're so glad you and your adorable labs love your new Puffy! Thanks for sharing.

My new puffy mattress is sooo comfortable. It works great on my adjustable frame. I read all the reviews and chose puffy based on those. It has lived up to them. I am glad I took the time to do the research. And of course the price. 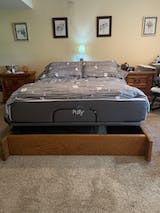 Sandra, thanks for a wonderful review! We're happy to hear you're sleeping better on your Puffy.

This mattress is dreamy!! Love it 😊 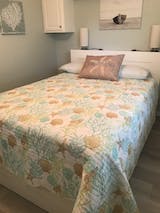 Thanks for five stars, Phyllis!

After lots of researching for a new bed I decided to purchase the Puffy queen hybrid mattress along with the bed frame, mattress cover and protector along with the pillows. Everything arrived as they said it would within a couple of days. This bed is the most comfortable bed I've ever owned, Even Jax, my Shih Tzu now wants his own "Puffy" bed. I guess I'll be making another purchase! Thank you Puffy for a great nights sleep! 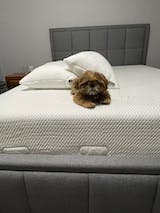 Ruth, we're over the moon you and Jax are enjoying your new mattress! Thanks for a great review.

The puffy mattress has solved my husband’s complaints. We are both sleeping more soundly as a result 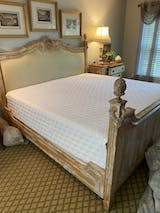 Bonnie, it's wonderful to hear both you and your husband are catching up on the sleep you deserve. Thanks for sharing.

The mattress aired out so nicely and even after the first night we saw a difference. It's firm and soft at the same time, so it's a good mix for me (side sleeper) and my husband (stomach sleeper.) 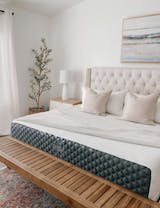 Jenna, thanks for sharing your beautiful bedroom! We're thrilled you and your husband are sleeping better on your Puffy.

This is by far the most comfortable bed I have ever slept on!!! In fact, I have trouble getting out of bed in the morning because it’s just that comfy. I’m not quite sure what I am going to do once I actually start going back to the office again. I’m currently laying in bed with my laptop. I never want to leave. Please don’t make me! Seriously though, do yourself a favor and get a Puffy mattress. You will NOT regret it. 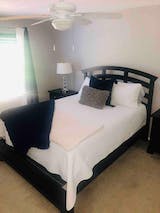 I waited 3 months before I wrote a review to make sure we liked our new Puffy mattress... turns out we don't like it, we love it. It is the perfect blend of firm and soft at the same time. We both went from being insomniacs to sleeping 8-9 hours a night. No more coffee clutches at 3am. I have to talk myself into getting out of bed now. It was a hard decision to order a mattress from the internet but I have to say, it turned out to be a great choice for us. And, customer service is beyond excellent. Thanks Puffy! 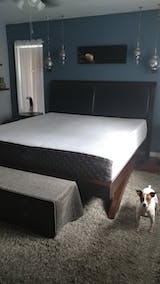 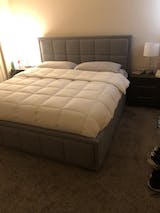 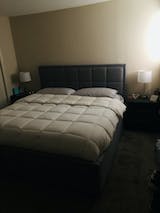 Thanks for five stars, Steven!

H
Puffy Mattress Happy Customer
Like Sleeping on a Cloud

We purchased this MADE IN USA! 'mail-order' mattress on-line and are so impressed with the quality and how comfortable it is. We are really enjoying are puffy! When lying on it, it just envelopes your body and you feel like you are sleeping on a cloud! Would recommend this mattress. Even the Tiger likes it!

We're thrilled to hear you're sleeping better! Thanks for sharing.

I never realized how poorly I was sleeping until we bought our Puffy Lux! Holy cow it is amazing. I have never been a fan of memory foam, have always preferred innerspring so I was a little hesitant about this purchase. I’ve also had 2 back surgeries so really wanted a mattress that would be supportive but not too firm. This mattress is seriously heaven. In fact, in the middle of the night, if I wake up and change positions, I actually smile bc the whole mattress is molded to my body and I’m so insanely comfortable! It’s crazy! 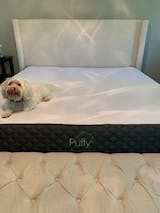 Sarah, it's so wonderful to hear you're sleeping better on your Puffy Lux! Thanks for sharing.

I had surgery six months ago. I have never had surgery before, and was surprised that one of the side effects was the inability to sleep through the night. I have been up every night for seven months. It was like having a new born again. I needed sleep. I saw a random ad about puffy mattresses, and decided to try it. It had a 30 day sleep guarantee. So, why not? Well, the mattress came, in a box. First strike against it. I got it out of the box, by myself, and thought it was too soft. Strike two. I have to say that with two strikes against it. The new mattress, my new mattress, hit a home run out of the park. It took a few nights to get used to the new mattress, but I have been sleeping better and better each night. I really thought I wouldn’t like it, because it didn’t feel firm enough. I was wrong. It is plenty firm enough.

Sharon, we're so glad you took the time to adapt to your new Puffy. We appreciate your review, and hope you're enjoying catching up on some well-deserved sleep after your surgery!

We made our guest room in a late 1890s- early 1900s look. We went with the Puffy twin XL. Our guest has been saying they have never slept so good.

What a great set-up, Joe! Thanks for sharing - we're thrilled your guests are enjoying their sleep on a Puffy.

We love our Puffy queen mattress that just replaced our RV mattress. We sleep so well on this comfortable mattress, and have found that it doesn’t feel hot or uncomfortable, even on very warm June nights. We are very happy with our purchase. 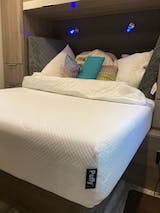 Jerry, it's wonderful to hear you're enjoying cooler nights with your Puffy. Thanks for a great review!

We love it. Our old memory foam mattress was 10 years old so we decided to try the Puffy. Very happy we did ! Highly recommend it !!

Peggy, we're thrilled to hear you're sleeping better with your Puffy! Thanks for sharing.

I'm selective about writing reviews, but we're so happy with our new mattress. That is why we waited some time before submitting a review. Wanted to see how well it holds up. We actually purchased our Puffy Lux king mattress over 1yr ago. I was very skeptical purchasing a mattress online without ever seeing, feeling, or testing out, especially for a king size bed. Arrived very quickly. Again, unsure how it would work as it was very compressed.
But to be perfectly honest, we're very happy & getting some of the best sleep in a long time. The mattress is very comfortable & appears to be holding up extremely well. After sleeping on it for over 1yr, we haven't needed to rotate the mattress because of body impressions like most mattress get. The sides are sturdy, even while sitting on the edge. The mattress is holding it's shape perfectly.
We're very impressed with how well it's holding up, still looks & feels like a new mattress. Unlike other name brand mattresses after 1yr.
We will definitely recommend purchasing the Puffy Lux mattress. It's the best mattress we've ever purchased. We love our Puffy Lux mattress, highly recommend. 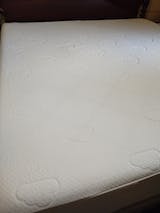 We're pleased you're catching up on the sleep you deserve, Gwendolynn! Thanks for a great review.

I purchased a Puffy mattress when we moved my mother to a memory care home since we needed to provide a bed that would fit in her room. I ordered a full-size mattress and was able to manage loading it into my car and then transporting it to her care facility by myself. Due to COVID, I had to be in and out of her room as quickly as possible. I moved the mattress from my car to her room with a dolly, then quickly set up her new bed frame and mattress within an hour. My photo isn't glamorous; I had to move so quickly that I couldn't stage anything, and it's a small care facility room with basic, easy-care bedding suitable for that situation. The staff at the facility says she absolutely loves the bed, so I am very pleased with the purchase. It was the perfect solution.

Susan, thanks for sharing your story. We're so touched to hear your mum is sleeping cozy with her new Puffy - it looks wonderful!

We absolutely love our puffy mattress and pillow my husband keep trying to steel it from me. Would highly recommend both. 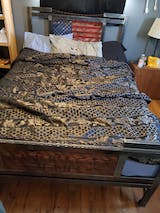 So great to hear both you and your husband are sleeping better, Kirstin! Thanks for your review.

Love this bed. I have a very bad back, GERD, acid reflux, and a hiatal hernia. Since the 60's I have slept in a waterbed for my back. This is the first bed I can sleep in that does it all. No more heartburn at night, wake up refreshed now with no back pain. And I got the adjustable frame so making this bed (at my age) is a breeze. Love love love it. 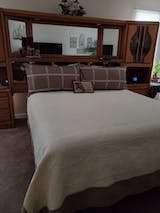 Pat, we're over the moon to hear you're sleeping snug with your new mattress! Thanks for sharing.

I believe are 15 year old toy poodle, likes it as much as we do, I know he spends more time in it. 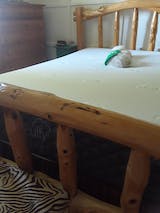 JJ, we're thrilled both you and your adorable pup are enjoying your new Puffy. Thanks for five stars!

Bought two adjustable bases for twin XL beds. Nice to have a king bed in two sections. My wife and I can do our own thing without bothering each other. The zero gravity position is our favorite. Love the mood(romance) lights!

Kirk, it's wonderful to hear both you and your wife love your new adjustable base. Thanks for sharing!

This is a great mattress pad. We have a 15 inch bed, and the pad fit easily over it and doesn’t move around, adding a layer of comfort. We bought it in the summer and it does not sleep hot. 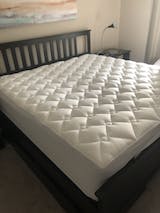 So good to hear you're sleeping cooler with your new mattress pad, Tam! Thanks for sharing.

Purchased because of weight of mattress since I have a bad back and making the bed was quite difficult. Well not only is it easy to make the added plus is how well I sleep on our new mattress. 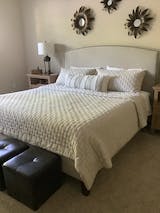 We're so pleased you're sleeping pain-free with Puffy, Shirley! Thanks for an awesome review. 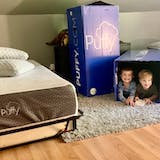 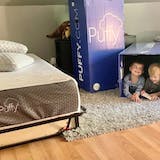 Sarah, we're so happy to hear your kids are sleeping cozy with your new Puffy! Thanks for sharing.

Prior to purchasing the soft topper I had both shoulder and hip pain and could hardly sleep on my mattress. I purchased the mattress many moons ago when I was young and could sleep on a firm mattress. Because I'm a side sleeper and am older the firm mattress was not working. I did some research and tried sleeping with pillows on top of firm mattress. It seemed to work and I then decided to purchase a mattress topper to create my own hybrid mattress. It worked and I am really happy with results. No mo' pain.

Paul, we're over the moon to hear you're catching up on the pain-free sleep you deserve. Thanks for sharing.